I’m starting to use the OM7 (sharp) and would like to suggest the possibility of changing the display size of the score objects. They seem a bit small and it would be nice to see them larger, otherwise one has to double-click to open the score window (and in there one can change the font size). So, in Preferences one should be able to change the default font size of the music in score objects! But, anyway, I really like the new interface.

Hi Gonçalo! Thanks for your comment and suggestion.
I actually replied to a previous related comment of yours here.
Just to says; the request is logged and the feature ready for v1.1

Hi, I just tried out om#, and it’s got a lot of great functions that I’m eager to use. Much cleaner interface and the new features are great. The new n-cercle is excellent, as is the bpf and maquette. For the time being, I can’t really seem to use it, because I get an error message every time I load a box, there doesn’t seem to be a way to send the microtones to separate midi channels without pitch bending, and finally, I can’t figure out the external libraries setup. The last one is undoubtedly my problem, since everyone else seemed to figure it out just fine.

I also have a few new feature requests: in om#, when a not is highlighted, it doesn’t give its onset time, which is something I frequently use in om6. I also had trouble moving single notes with the arrows - it only worked when the whole block was highlighted.

There are a few features that were never there but would be of great use to me. Most of all, the ability to either set chordseq grids to floats, or, preferably, to subdivide them, especially by 3’s. Any time I’m working with triplet values (or 7’s, less commonly) in a chord-seq, it gets out of synch, and it becomes a 10 -or 15 step process to quantify it, only with the help of the rhythm library. Conversely, when you send triplets from a voice into a chordseq, it stays nicely lined up and requantifying it is no problem.

The ability to carry out processes by index. This already exists to a large degree with posn-match, but I only discovered rang-p a few weeks ago by accident, and otherwise the only way I know of is to count something yourself. There’s also an indexer in one of the libraries.

Finally, the ability to mark up notes in a chord-seq with some value that doesn’t have another function, like channels or velocities. When separating voices (manually, as I get better results), I typically use channels, but they are also carrying the microtone information, so it won’t play back while parsing into voices. This isn’t a big problem either, but I think there are a lot of applications where marking up various notes would be useful (anything with omif).

That’s plenty of suggestions from me, thanks again for this amazing musical toolkit.

I get an error message every time I load a box,

Can you be more specific on how you get that error message (what do you mean by “loading a box”), which error message is it, abnd which box (if any inparticular) ?

See this recent thread in project issues: https://github.com/cac-t-u-s/om-sharp/issues/129
You can send microtones, but MIDI note channels are not automatically modifed when playing in 1/4 or 1/8th tone, as they are in OpenMusic. I have been willing to find a more straightforward solution (in terms on UI) but have had no much feedback so far, so I am happy to consider rethinking/improving it.

when a not is highlighted, it doesn’t give its onset time

Good point (if I understand what you mean).
In OM the start/end time of the selection is printed on the editor.

I also had trouble moving single notes with the arrows

Notes can be only transposed. In order to move them “in-time”, you need to select th whole chord.
I think this is the same in OM.

Thanks for your other suggestions.
About the “note marking”, have you thought/tried to use “extras” ? This is not a very well documented feature (either in OpenMuic or in OM#!) but could be useful for that. In OM# you can enter extras directly through the chord-seq box inputs: 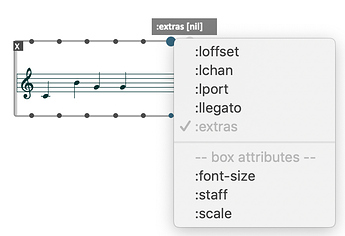 For starters I have to say I deleted OM# for now… if it’s helpful I will reinstall it and get the exact info you asked for, It might take me a day or so.

Finally, I’ll just add - one of the things I like about OM is that, for all the updates and new features, it’s stayed pretty stable with regard to the GUI, which means I have time to learn how to use it before the next update, and also the interface itself is mercifully easy on my little macbook air processor. (Max/MSP always crashes my computer). I’m going to have to replace my computer soon, and I am always afraid of losing stuff or becoming deprecated.

Thanks, Jean. Somehow I did not receive a notification for this… and Covid-19 came into the world… Looking forward to version 1.1!