Great with the new releases of Spat5 and Panoramix!

I have a concern in Panoramix of how to route channels on audio interfaces which has more than 64 outputs? Currently Panoramix is having 128 inputs channels and 64 output channels.

I have a RME Fireface UFX+ which has 94 output channels, where I am using the Madi channels residing on channels 31-94. So across the 64 channel limit and therefore remapping is necessary.

I could do the remapping in TotalMix, but would get into an annoying mix of channel types (analog, adat, madi). I could use a virtual device in fx Loopback to achieve the remapping, but it drags unnecessary resources and adds one more step in the signal chain.

So how would I do if I like to have the remapping happening in Panoramix itself to make it serve as the final step before TotalMix? An option could be something like the Max Audio Status window that has an IO mapping function that allows this. Since Panoramix also has an Audio Status window maybe such a function could be included? Or else raise the number of the output channel matrix to 128 channels?

Curiously enough the “Test DAC” function has 128 channels, while the “Routing…” of busses has 64.
So apparently somewhere in the system 128 output channels seem to be possible.

Thanks for Panoramix which otherwise serve as a great spatial mixing frontend !

Indeed, having an IO Mapping window – as in Max – would be helpful.
It’s almost here already, but not completely available to the end user.
I’ll try to improve that.

Also, to let you know that the next version will provide 128 output channels, which should solve your problem more elegantly.
(I’ll send you a private link to a beta version)

Thanks for your feedback,
T.

What a quick reply! While waiting on the new release is there an OSC message I could send to Panoramix to open this hidden Audio Status window (which will give me access to the IO mappings)?

Unfortunately no.
As you can see, the current I/O section only supports “straight mapping”. 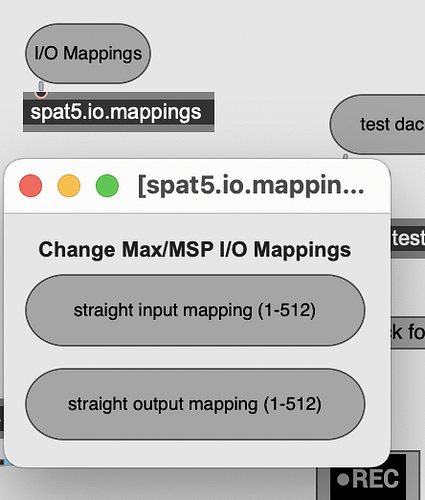 Oh yes, I see. You are in edit mode, of course. There I can click my way into the spat5.mc.dac64~ and change the IO mapping manually! A hack that works for now! Great!

Oh yes, I forgot that you can access it via the mc.dac~
Excellent !