It will support live 11.2.5, and comes with a new device xp.sm, some bug fixes, improvement and a newly designed xp.room 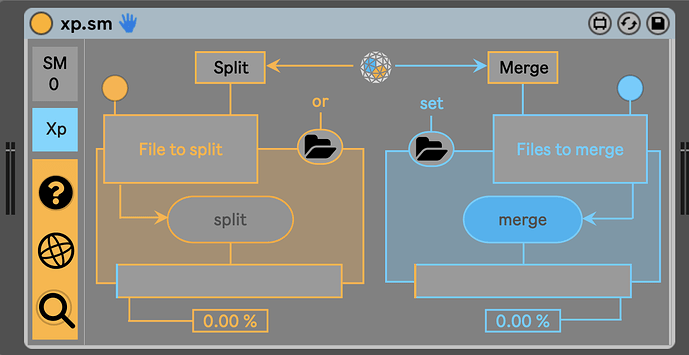 XP 1.13 will also bring a newly designed xp.room that I hope may help you to shape a more precise custom reverberant environnement. It using spat5.reverb.timeview 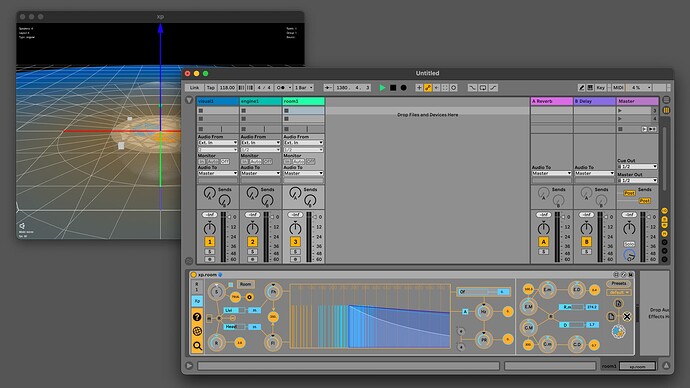 Create and save your room design as a user preset

Designing immersive sound.
How the new xp.room could be also used as a spatial fx.

Recorded in real time, in binaural (as the sound field output at the same time).

You can just being improvising with it and record what comes out for further use, like edit an multichannel piece.

Xp has been updated to 1.13 and is available in users account at www.xp4l.com 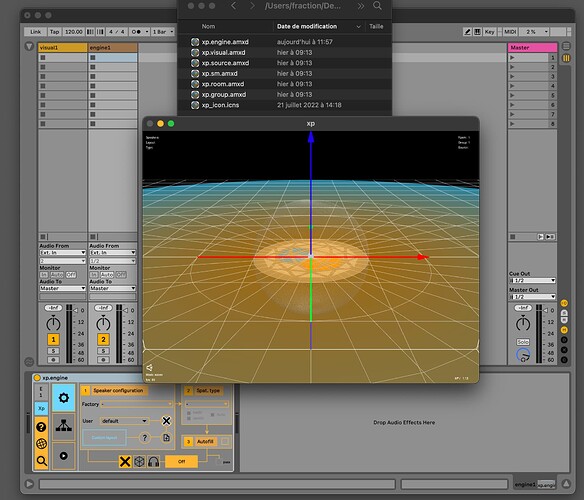 A quick note for XP users from version 1.11
XP is a whole: for each update, there is a standalone and a new package of devices that are supposed to work with it.

It is therefore preferable to remove the old devices or simply replace them with the new ones after updating the application, and thus avoid that a project tries to open the application with devices from an earlier version.

Please also note that XP is optimized for Ircam Spat ~5.2.9.

Be sure to update your Spat installation as well

A quick tutorial on XP 1.13 installation is available here : 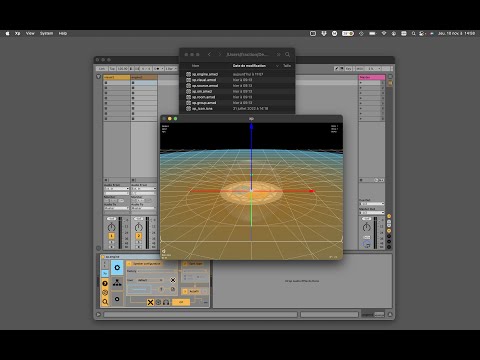 It is iuncluded in the last XP update, so if you dont have XP, the documentation wont be accesible from the right menu, but it’s available from the file download in the project page.

Pretty fantastic performances with (only) a mac min m1 2020.

For the mac mini, as the gpu is very smaller vs mbp/studio, it could be interesting to shift to 30 fps instead of 60 (from xp.visual main interface) 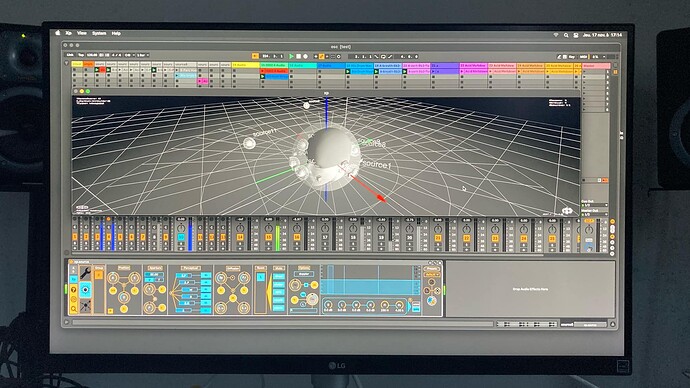 XP is a whole, and to an update of the application corresponds the bundle of max for live devices.

So, if you update the application, remember to use the right devices version. The best practice recommendation is to have only one version on your computer.

Important: what happens if you have collected & save a project made in Ableton 11.1.6 or before?

If you “collected and saved” a project that was made with XP 1.12 devices in live 11.1.6 (or before), and if you open this project after XP and Ableton upgrade, this project will continue to use the old devices, copied in this export directory, and this obviously even if you have upgraded the application afterwards. Normally, this would not be “too” bad. But the upgrade to Live 11.2.6 requires the use of XP 1.13 for both application and devices.

So if you try to open in live 11.2.6 a collected project made in live 11.1 with XP 1.12, you will have problems. You have to replace the devices in your export directory by the new ones, or delete them, and then let Ableton ask you to indicate the directory for these plugins.

Hope this is useful!

There’s some progress on the windows version!

There will be some differences with the Mac OS one, but not that much on the user end. It will have the exact same workflow. Il will come back to that once this is released. While porting a generic m4l device from mac os to windows is pretty much straight forward, as XP is using specifics spat5 dependencies with advanced features in the devices and other specifics in the standalone, it takes a bit of effort to migrate.

As for the performance: 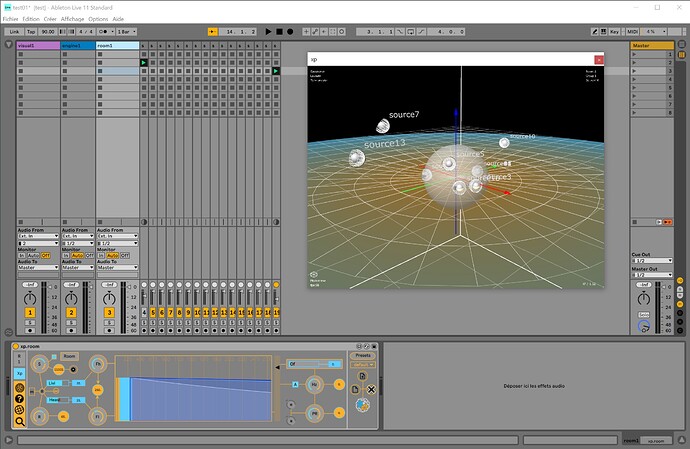 Perhaps I should have shared this information earlier, but it’s never too late to do so.

When you work with XP, and this is in fact also true for all max for live device, you have to make sure that Ableton audio is enabled (top right like in the video bellow).

In the case of XP, the consequences of an inactive audio will be more visible, because the XP standalone will not be able to launch when you add xp.visual, thus making it impossible for the whole system to work or a saved project to load. The error message generated in this case is also not very appropriate, but it’s because XP standalone can’t communicate with the max for live devices.

The reason of that is related to max-for-live implementation :

Most of max objects (no all of them) run on the high priority audio thread, which requires obviously to have Ableton audio active to work. If you have followed, you understand that the entire udp/osc network that makes XP working, can’t work without the audio enabled. It’s actually for the good, because it means that the osc communication will be treated as a high priority task in the low level program.

I have had feedback from users who have been searching for the reason of a launch problem, and in most cases, this was simply the problem.

So before creating a new project or loading a project with XP devices, make sure that Ableton audio is active. 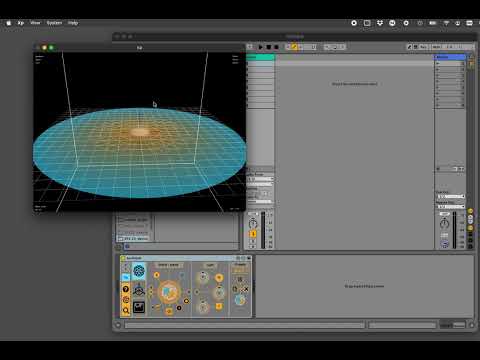 By the way, XP for windows is now in beta test. 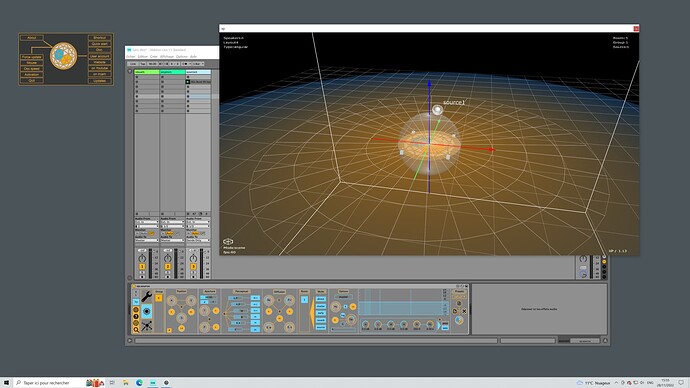 Xp windows version will be available from tomorrow.

XP users will find also the Windows version available from their account.
Owner of Xp license will have from now two download links :

I will make a tutorial very soon for windows, but in the meantime follow the installation pdf that is included in the zip.

While the windows version keeps the same workflow, and brings some cool future benefits, as you know, the windows environment is sometimes a bit capricious, where Mac is too rigid. So this release will be accompanied by a period of observation of every user feedbacks. I have had some small ones in the Beta, not because of XP but because of windows, or Spat, that as for mac you must also have on your computer.

Speaking of which, the installation of Spat windows implies to have also installed the redistributable package c++ 2019 (https://aka.ms/vs/17/release/vc_redist.x64.exe).

Please comply with the installation rules for spat for windows.

After the notarization of the Mac version, the release of this version is a huge step for XP, which is now cross platform, intel, m1 and windows, making XP one of the most available tools for spatial audio for Ableton.

A lost note, Spat~ 5.2.9 has a bug which make Ableton freezing when using xp.sm. This is already corrected in spat 5.3.0, that will be soon available, so it has been decided to leave that device in this distribution. But please be aware of that issue. I will remind you to update to 5.3 when it s released.

If you have any problems with the windows version, I will of course be happy to help you. 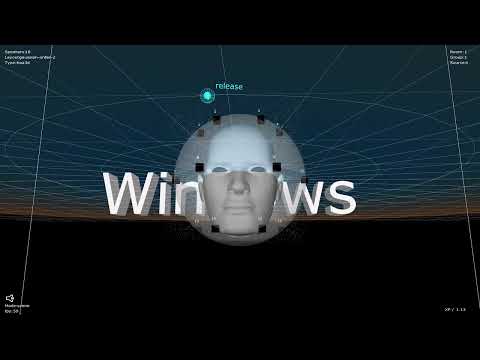