I am doing Time stretch of a file and AS is adding silence at the end and the beginning… does somebody know why?
(The original file starts directly from the beginning with signal… see screenshots ) 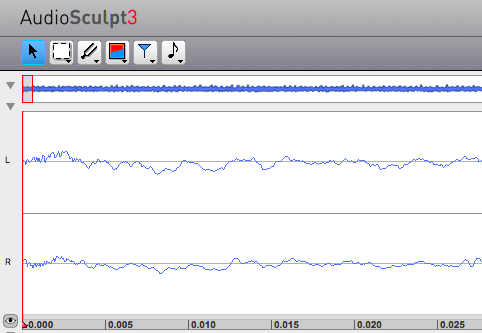 I would guess you have unchecked the little checkbox in the top right corner in the processing Parameters dialog.
Could you redo your treatments and see whther box is checked and if not check it and the inserts will disapear.

They are the result of the box asking to place window only within the soundwhich then leaves some windows that are initialized to zero
which lead to these inserts.

Thanks a lot!
That was the mistake…

There is one more question …

I would like to control my time stretch synthesis with OM.
Do you know in which inlet I can find there the checkbox parameter? (s.screenshot)

Thanks a lot
Best L

I went through this with mariarose during the ateliers forum. My question for you, Is this feature (checkbox) is SuperVp related or a specific feature of AudioSculpt. I tried it with and without, and the main difference is the -U switch. Howerver even if we use the -U with SuperVp commandline, i am still having some silence at the beginning and end.
I am asking this so i can hack this is the OMSuperVp lib. So if it is a An AudioSculpt only feature, we cannot do anything about it in OM side.

There are no AudioSculpt specific features so you can produce the same effect on the command line.
The difference that the checkbox triggers is indeed the -U flag. I copy here below the documentation which tells you everything, But in short the silence appears if the -U flag is given and you time stretch your sound with dilation > 1. So if you want to avoid this silence you should not use the -U flag, which was historically necessary to avoid noise at the start of the sound, but after fixing many bugs around the year 2000 the bursts disappeared and with them the interset of the -U flag. I don’t see any reason why you would be interested to use it today.

help extract on
-U:
controls the position of the first analysis window with respect to the first sample for both tracks.

If the -U/-u flag is not given the processing starts with the analysis window centered over the first sample.

With -U/-u moves the window such that its first sample matches the first sample of the sound. This avoids artifacts due to the initial step in signal amplitude. For time stretching and processing the sound will be ramped in, but, a zero value range may be created if time stretching is applied.

I don’t quite understand the reply. What I said was : in most cases you don’t need or want any silence at the beginning. The -U flag is there only for historical reasons. So don’t set it. In AudioSculpt that means you should normally not remove the checkbox “extend over sound limits”. The mapping is a little bit counter intuitive, unchecking the box adds the flag.
Best
Axel

Ah ok Sry… now I got it, what you mean

Yep, Karim would just have to not set the -U flag. He said he added it and said there is still silence, but he should have removed it! If yoju have two -U flags that does not chnage anything, so he woud need to find where the -U flag is set in the first place and remove that.
If it is not set and there is still silence then there is a bug somewhere could be a -B flag. As OM uses basically the same SuperVP that is running in AS where everything works, I don’t think it is possible that there is a problem with SuperVP. If you can, please dump the command line that is used in the OM SuperVP library and send me the input and output files that show the problem. If you cannot dump the command line just send me the files that show the problem, normally the command line should be stored in there.