Hi everybody !
Is there any way to import (or export) texts (and thus dynamics, accents or any musical indication that isn’t related to a specific font)
attached to a note or a chord in a MusicXML file ?
If not MusicXML, is that possible with NAP, or with ETF ?

Unfortunately I don’t think any of this will be taken into account at importing a MusicXML file.
NAP in/out, will not include any of this either, and ETF is not supported anymore.

Thanks Jean,
I didn’t know it was possible to export such things, great !
Do you think there will be also the possibility to import them, sooner or later ?

Do you think there will be also the possibility to import them, sooner or later ?

Yes. I just don’t know which one of the two

Yes there are ways. However, i suspect you mean dynamics from om extras ???

if not it is really easy to do to export all dynamics from om to .ly or .xml files. However, there is a slight problem with these if not extras… this means that you will have each note, each chord with a dynamic…
Is this what you need ?

Now if it should be extra-dynamics, well this is great, but should be coordinated with the development of these extra code, since these are not that well implemented in my opinion.

I saw there are several posts concerning the possibilities of exporting the text-extra into XML and maybe Finale. There are some score objects with text indications, and they will be then quantified as voice + text-extra on notes.
I wonder if it would be possible to export also the text-extra into the XML file and then import correctly as text (or maybe text expression) in Finale?

Thank you very much for the experiences! 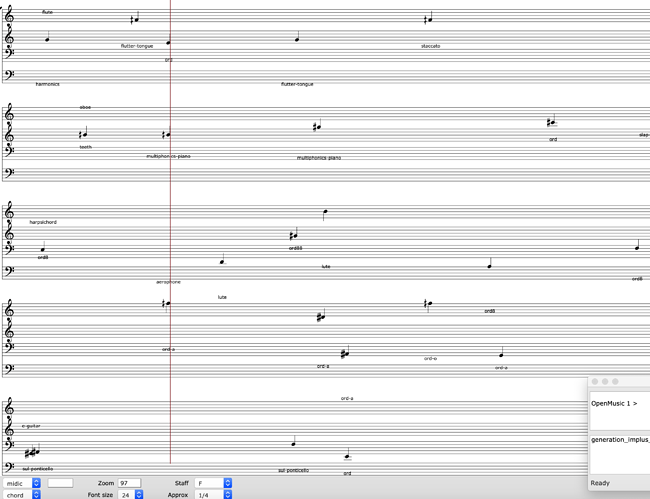 Yes of course it is possible, however this will need some work to do. Before that, we should find a stable way to export musicxml files. As you maybe did also read here and there, there is still some compatibility issues regarding the parsing of xml by FInale and Sibelius issues to be resolved. I will see what i can do. But acutaly i am working on the quantification issue. So maybe soon.

I just quantified that multi-seq as POLY and tried the XML between OM and Finale (V26), despite some error message in Finale, the importation was done perfectly with all the text-extras in correct position, as lyric text linked to the notes. That is an amazing work.
Thank you for the information and realization!

Happy that it worked for you.

Dear Karim, dear OMers, nice to go back on this thread after a while

I’ve been using text-extras and head-extras for a long time (I use these additional informations to control a custom-made sampler (the text select the playing technique and so on)). While exporting the score to Finale however I’m still stuck with the old ETF exporter, which deals only with pitches and rhythm (although in a very precise way). After having read the latest developments of this thread I made a couple of tests with MusXML and an old version of Finale (2012, unfortunately I don’t have a recent one on my laptop and I’m not home right now) and I noticed the following things (which most likely you already know) :

If you are planning to work on these issues, I’m up for betatesting

Thank you for your detailed report. Before giving some thoughts on it, just one question: What version of OM are you using?

Well this is weird. I know Musescore doesn’t support embedded tuplets while importing its own musicxml export. But i’ve tested it in finale (maybe a more recent version?"

It might be so. I’ve got to check out if musicxml supports multitext attachment…

Yes it is not yet implemented, but it should not be very difficult to do. It could be time consuming but not difficult.

This last feature, regarding enharmonics, and also note changes, seems to be a Finale issue. Some Sibelius users reported that it worked.

All in all, i will be happy to go into this again, the problem still remain: to have a universal compatibility on all commercial and non-commercial engraving softwares, to own them of course (i don’t have personally neither, Finale, sibelius, Dorico, only musescore and lilypond), and run the test on all of them using their latest version. So you can see it is rather time consuming and to tell you the truth very annoying: Once you fix something, there is a high possibility that the fix breaks in a new version of these soft.

Ok, I just tried with OM 6.19 and Finale 25.5
I have’t been trying to export multiple layer of texts this time (but I don’t think this will work).
You can find attached a simple test I’ve been running :

you will notice that :

I hope you will find this short report useful.
Greetings from Venice

Thank you for your valuable report. Some comments:

Yes this was not figured out since the old export relied on an old version of OM. On todo list

Yes this is really wrong! - Should fix it.

Yes i tried double layer text, and it is not yet implemented. Should first see how the musicxml format deal with this issue.

Yes again, in the older versions of Finale, 3 1/8th tone was not supported. I don’t know if it is the case of newer Finale version.

By the way can you send the voice so i could check the export and hunt these issues?

Hi Karim, here’s the patch with the voice I used for testing :

I just finished some lines of code, which allow one to export the basic note head and dynamics information (made by extras) from OM to Finale.
You could try it by put this lisp file into init folder (It seems to be safe, at least on my computers, hope also not harmful for yours

), then restart om and try the exportation with the voice object in the patch test.omp.
If you need more specific noteheads and dynamics, it is possible to add items directly in the two variables for the translation.

Still have the 1/8th microtone issue to lookup.
And I hope this will not brake things down for Sibelius users. (if any, can you test please.)

Don’t be afraid to report back. Still have a lot to update in the Extras in OM.

Best to you all
K

Thank you so much for organizing and completing the code!
Yes, it is my pleasure to share it, hope this will not bring additional error warning in OM.
ps … There is a mistake I made into the code: line 656, instead of “pp” it should be “ppp”.
Looking forward to the further possibilities with extras.

I will integrate the changes. Just will give time for reports before that hoping this will not affect Sibelius and other application parsers to read our exported file.

Thanks Jianlin, thanks Karim, this looks like a huge step forward.
I’ll check asap and run some tests.

The microtone (and flats) issue is right now (at least for me) the biggest problem and the main issue that discouraged me to export through MusXML (I’m still relying on ETF, though an old version of Finale running on SheepShaver !). The problem is that (at least in Finale) editing the microtones (enharmonic spelling and so on) resulting after the conversion of the MusXML file is painfully slow. Truth is, I don’t think there is a way to improve this (I don’t think that the special mapping with nonstandard key signature of the ETF is or will ever be supported by MusXML). So the only viable option would be to have a clean output with the right enharmonic spelling and to not rely on further editing in the notation software … For this reason I think the first step to take would be to implement in OM an easy way to do the enharmonic flat equivalent of ANY note (or at least quarter and eighth tones).

All the best to you both
Cheers
M.