Questions for FEM inside of LUA

I am diving into the world of FEM inside of LUA - really phantastic what seems to be possible here!

I am trying to understand the way the example 3D instruments have been made - AND - to see which mlys getinfo/setinfo messages that work with the FEM object.

There are many questions to be answered, please see below. I made the adjoint patch in order to record them. Feel free to answer any of the questions as you like, in any order, maybe one by one?

Have a look to the patch and especially the subpatcher “testing-FEM-messages”.

All the best Hans Peter

Listing questions of FEM inside LUA

Thank you so much for your interest and deep diving into mlys.lua and 3D!
I am answering the Lua questions first.

After some time you cant excite the FEM. Why ?
Because your object is attached nowhere (a “boundary” condition (=hold) that is displayed in red in the 3D view). See the other examples. Sometimes it is tricky to pick a node to create a hold.

I can see that your result mesh has issues: it is like there is a double shell or something. I will look into it, and also address the other questions!

Great Robert! And thank you for the clarifications. Lua start to stand in a brighter light …

As for the two last Lua question here’s some more explanations:

Have a look to my lua script where I included a revision of your function (method) “ParametricCurve2D:createMeshFromCurve()”. I could not make this function accept my mesh unless I asked it to do a a loop from n=1 to self.resolution-2 (your version does self.resolution-1). So maybe my mesh is bad or the loop should perform safer indexing to accept meshes of various layout or sizes. Both could also be true, of course. I would like such a function to be true class method so each object (mesh) could redefined it as necessary. I am not sure if true methods are be possible in Lua?

I should be more explicit. By “not working” I mean specificly in relation to my mesh. I had to fixate the node used for the hold-mesh (see the “build3Dobject” function in the script). Its a bit the same kind of situation as for the previous question. Either my mesh is bad so getNodeXY can’t find a valid node or the function could be made more general (safe) to be able to work with many different meshes. The last option would be lovely of course. Again I think this would be best solved if Lua would work with proper methods.

Looking forward to your answer(s), all the best Hans Peter

There are several issues in your script.

NB: for upcoming Modalys 3.7, I intend to add support for true parametric surfaces (so with 2 parameters s and t). It’ll be much easier to create interesting surfaces…

I will respond the remaining questions (messaging) later. 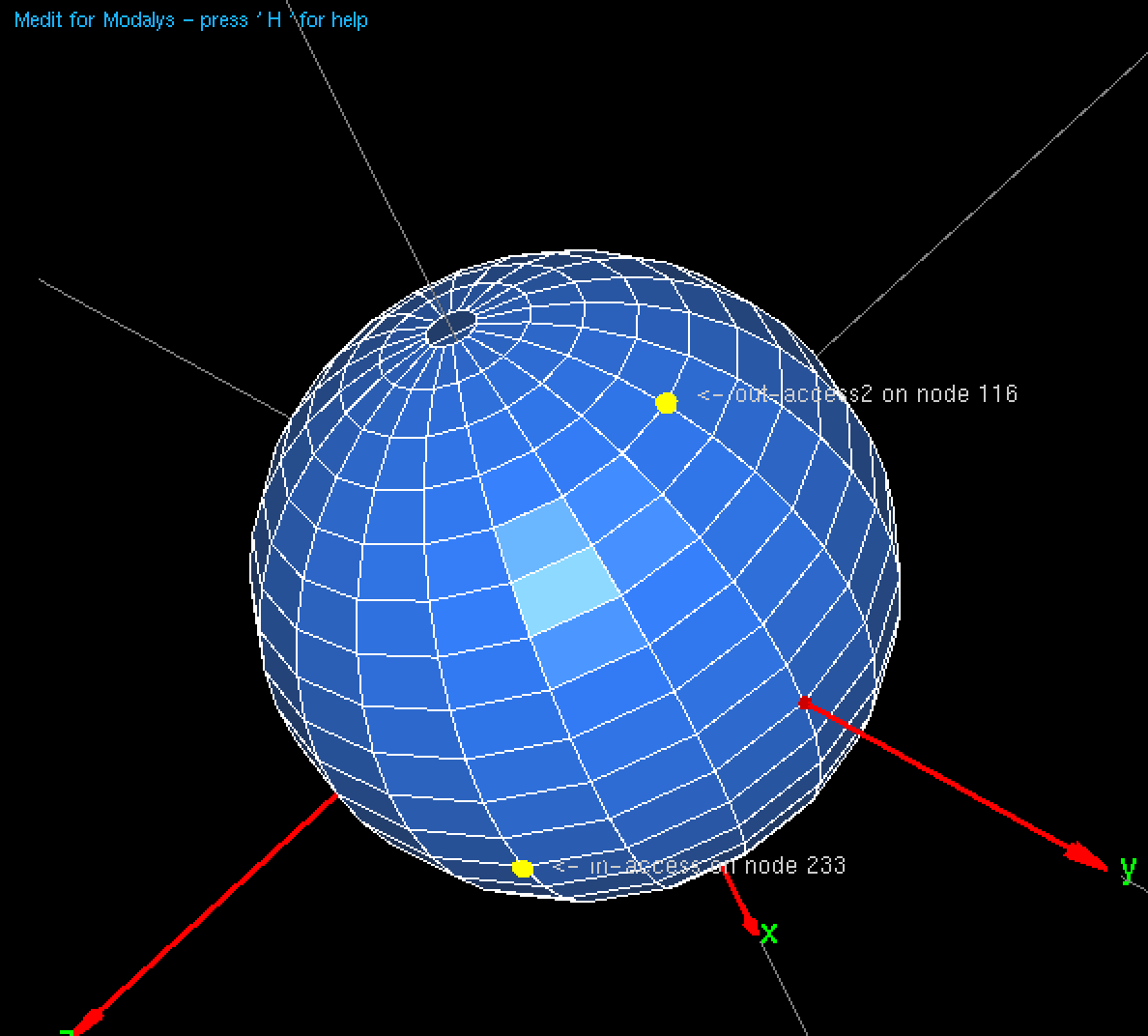 Thank you very much, Robert, that was really helpfull.

I see now that the main problem was that my mesh was badly constructed and many issues arose therefrom. Firstly it sort of wrapped twice around itself like you said due to the 360 degrees rotation (which really should have been 180 degrees). This wrapping distorted the mesh with regard to the “ParametricCurve2D:new” function (forcing me to redefine it). It works for me now without modifying any exisiting functions (which I agree is a dangerous enterprise best to avoid). Secondly my holding point was not defined correctly meaning the object would drift unanchored in space. So I could hit it once or twice quickly after instatiation then it would be off to unknown galaxial terrain. Solved, great!

• Could you give a brief explanation of what is meant by “singularities”? I understand it to be a type of undesired mode(s), perhaps of zero frequency and/or a zeroed out modeshape?

• Would there be any method for resetting (forcing) the position of an object who has swayed off?

• Say I had succeeded in creating a closed parametric sphere. Could classic “hole-connections” have been applied to remedy for the holes missing in the mesh construction?

I should maybe add that of course there is a sonic difference between a closed sphere and one punched with holes. But I guess its a natural consequence of such objects modal differences.