I am trying to realize the hexahedra-based 3d-mesh in OM/OM#. For now, I am using the 3dc box to display the single hexahedron, and using the 3dc-lib to display the whole mesh.
During the display there is a small issue:
When the number of points (or the number of 3dcs maybe…) is above the limit in 3dc-lib (suppose it could be 2048), then there will be an error message while double-clicking the object (to open the editor) :

"An error of type list-too-long-for-apply occurred: Last argument to apply is too long: 2304 "

After tracking the code, I found the process is blocked by calling the (make-instance '3dpanel) under the (defun om-make-view), it could be located in the folder “/api/om-LW/view”, and it was called by the method “initialize-instance” under “3d/3deditor.lisp”. But I could not understand why it was blocked and if there is chance to enhance the limit of number of points/3dc in 3dc-lib easily?

In the attachment, there is the patch, some methods could not be used but I guess to double-click the third 3dc-lib will reproduce the error message. Thank you for your help in advance! 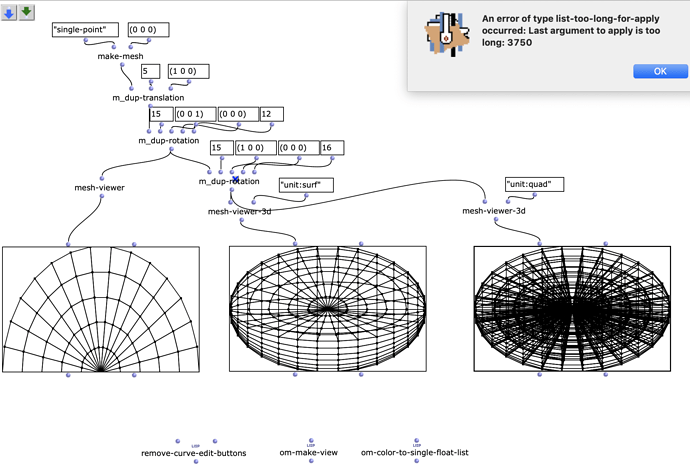 I think i know from where this error is generated. However i cannot test your patch since i don’t have the library…

In the attachment you will find the Library. It is still under construction and not cleaned yet. Could you help me to test the patch with this Lib?

Great stuff you do here.
I corrected the issue and will figure soon in the next release.
For the time being, put this file in your init folder inside OM and you will be able to open the editor. However it will be a slow interaction,

Thank you so much for your help!!
The 3dc-lib is opened successfully and running smoothly now. With this solution I think the rest of lib will be finished soon!